SEE WHICH FAMOUS CELEBRITIES VISITED US

Get in the same chair as Tay Schmedtmann, Lotan Carter, Jack Wish, JaacMaate, or Jesse Lingard!
Are you in? Scroll down and see the stories!

For a while he working as a recovery driver, and filmed his day-to-day life as a 'van man' which saw the inception of Stevo the Madman. He also has been featured on numerous TV shows. Since the beginning of August 2016, he has hosted a YouTube series for JD Sports with co-host Craig Mitch. The pair discuss the latest football news, matches and gossip on a weekly basis. He was seen on Celebrity Coach Trip too and covered the 2020 Super Bowl for BBC Sport on the opening night - interviewing the players, teams and coaches ahead of the big game. During December 2019, he also starred in the Come Dine with Me Christmas special in a bid to win £1,000 for charity over a week of competitive cooking and hosting. Also in December 2019, he appeared on comedy, music and talk show The Big Narstie Show with friend Big Narstie and comedian Mo Gilligan where they discuss his content and upcoming projects. 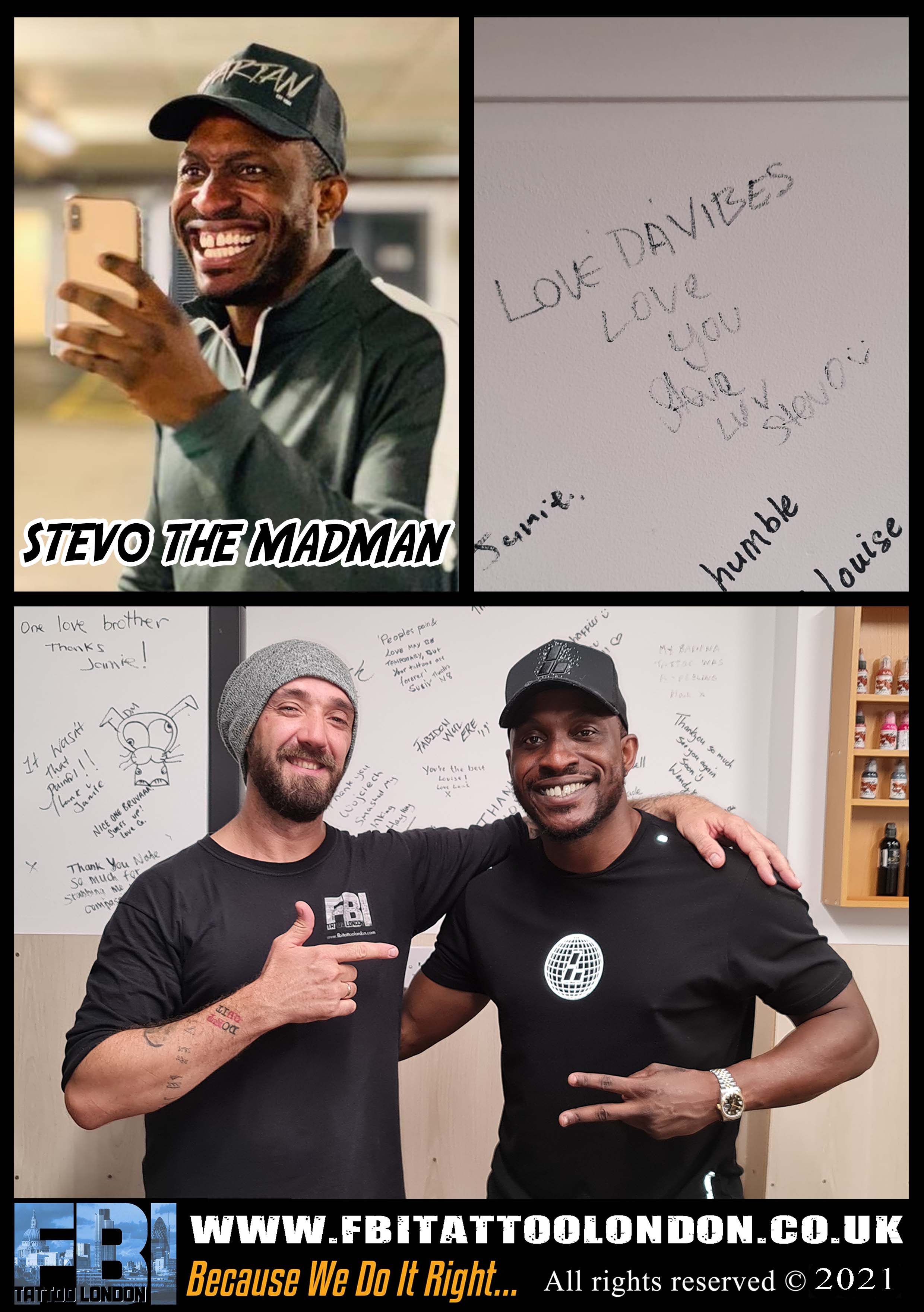 This man holds several tattoo related records in the United Kingdom. In 2013, the HM Passport Office refused to issue him a passport, claiming that his unusual name didn't fit their policies, even though he has changed his name by deed poll. He successfully challenged this decision and obtained his passport in July 2014. He has over 90% of his body covered in ink. In 2014, he became a two-time world record holder, having had 29 tattoo artists tattoo him at the same time. However, in 2016, he broke his own record from two years earlier by having 36 tattoo artists ink him at the same time. He described this feat as being "not very easy and with a lot of pain". Well... duuuh :) 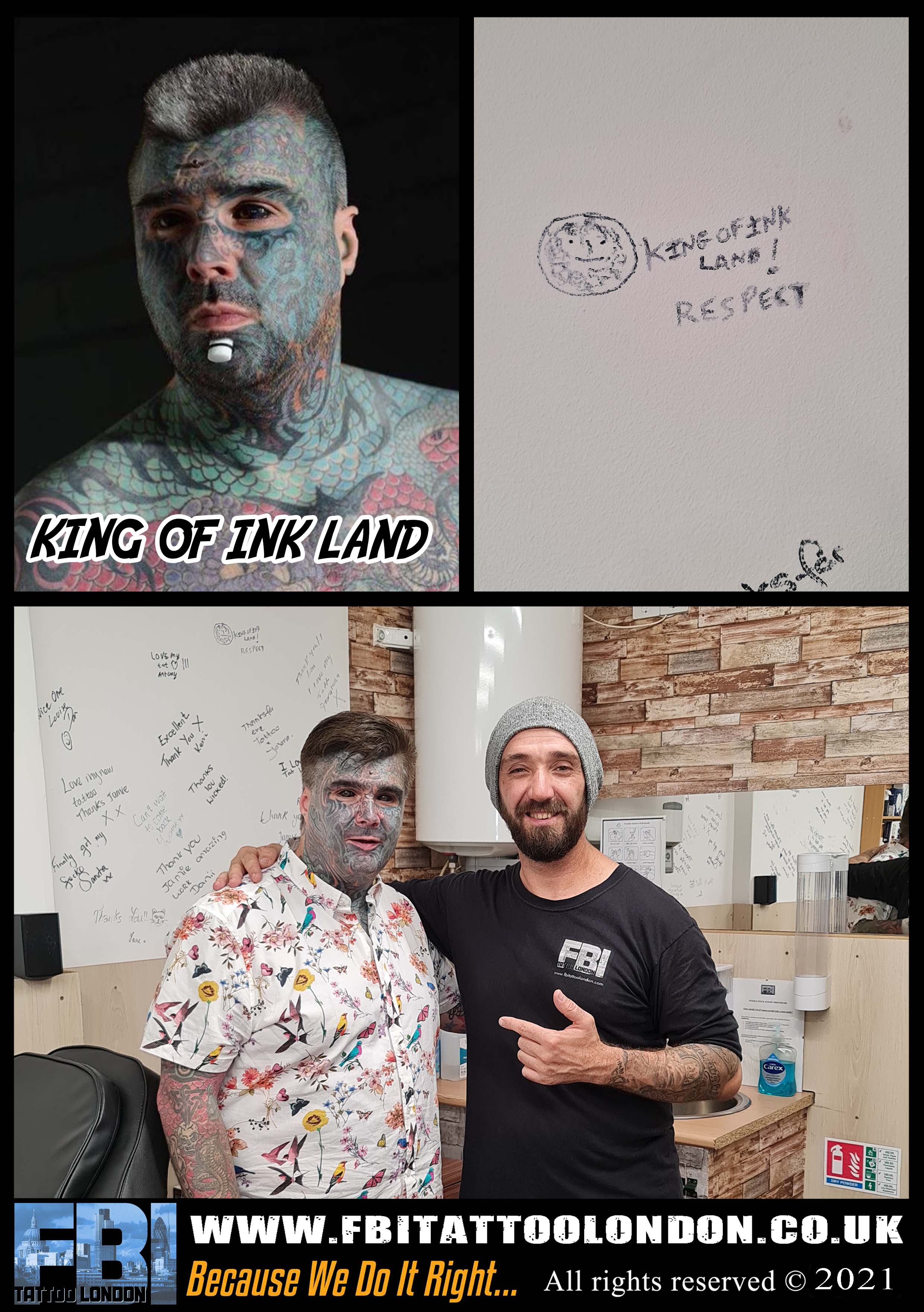 Tay Schmedtmann is a German singer. He appeared on and won the sixth season of The Voice of Germany. In the “Blind Auditions” he performed the song Strong Shoulder by Julian le Play and was selected by all four coaches. He joined Andreas Bourani's team. In the first live show he prevailed against two other team members with 80.9% of the audience votes and thus achieved by far the best result of all four semi-final winners. Even before the final show, he was considered a slight favorite due to the streaming of his final song Lauf Baby lauf. He reached the final and won there with 54% of the vote against Robin Resch. In the week after the final, the single Lauf Baby Lauf reached number 23 in the German charts. Tay flew straight from Germany to get this piece done at FBI Tattoo London. Thank you Tay! 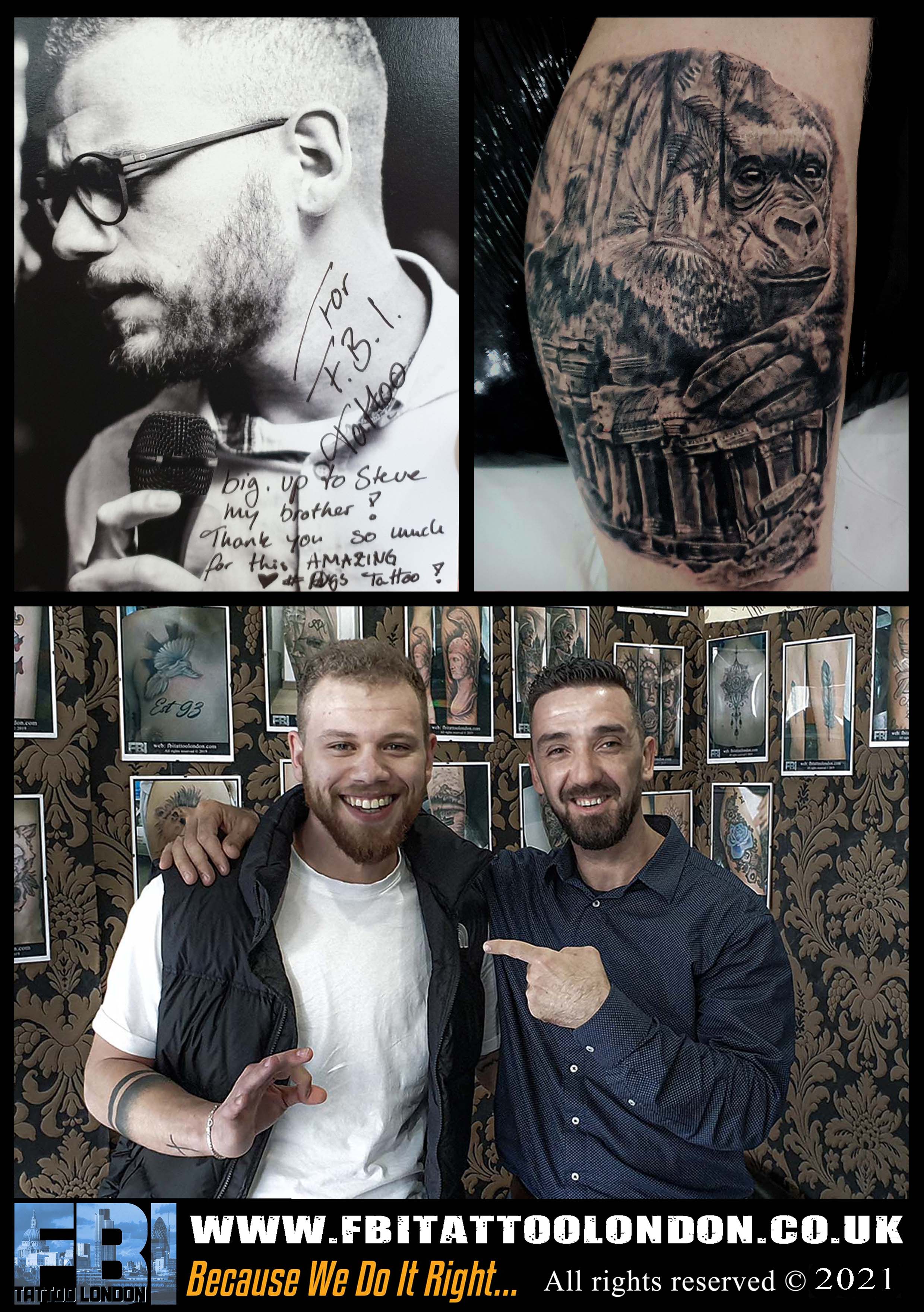 Jesse Lingard is an English professional footballer who plays as an attacking midfielder or as a winger for Premier League club Manchester United and the England national team. He has won the UEFA Europa League, FA Cup, FA Community Shield and EFL Cup, becoming one of only three players to score in all of the latter three finals. A highly productive loan spell with fellow Premier League outfit West Ham United in 2021 saw Lingard rediscover his form, scoring 9 goals in his first 11 appearances for the Hammers. He represented England at under-17 and under-21 levels, before making his senior international debut in October 2016 and went to represent his country at the 2018 FIFA World Cup, a tournament where England reached the semi finals, finishing fourth. Apparently he won a challenge against You Tube star JaackMaate, and they both ended up at FBI Tattoo London's Enfield branch for some adventure. Thank you Jesse! 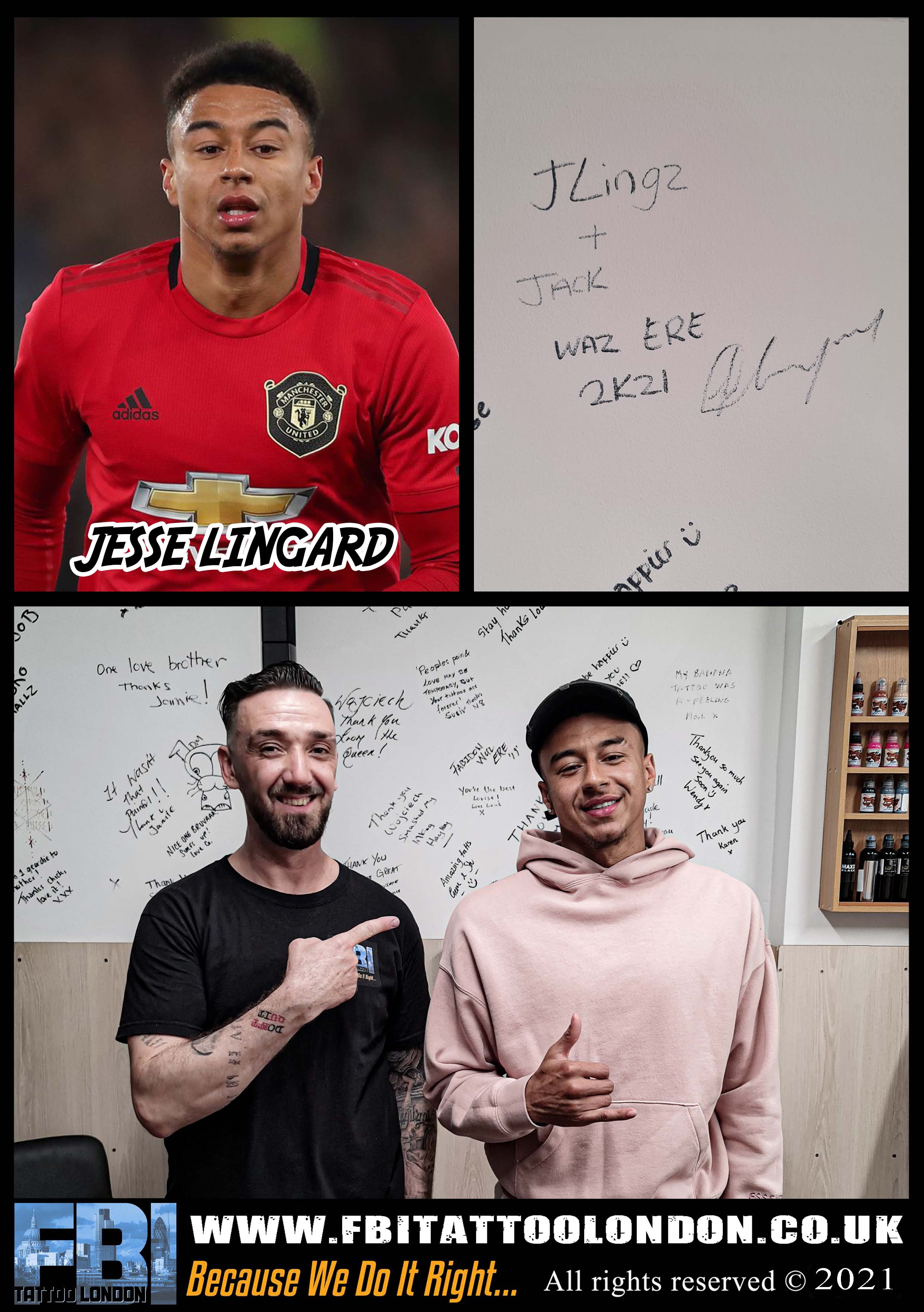 Jack Carl Dean, better known online as JaackMaate, is an English commentary YouTuber who was born in the city of Norwich, Norfolk, England. He grew up with a big interest in media sciences and eventually earned a degree in it.  He also has appeared in the UK reality TV series Big Brother. Jack is known for his commentary videos where he typically criticises other YouTubers in a comedic way. He has a very popular podcast known as the Happy Hour Podcast with Stevie White and Dudey Rhino. Recently Jaack made "JaackMaate" a company and employed his fiance Fiona and Indie Singer (also a friend of Jaack's) Alfie Indra.  Apparently he lost a challenge quite publicly against football star Jesse Lingard, and they both ended up at FBI Tattoo London's Enfield branch for some adventure. Thank you Jaack! 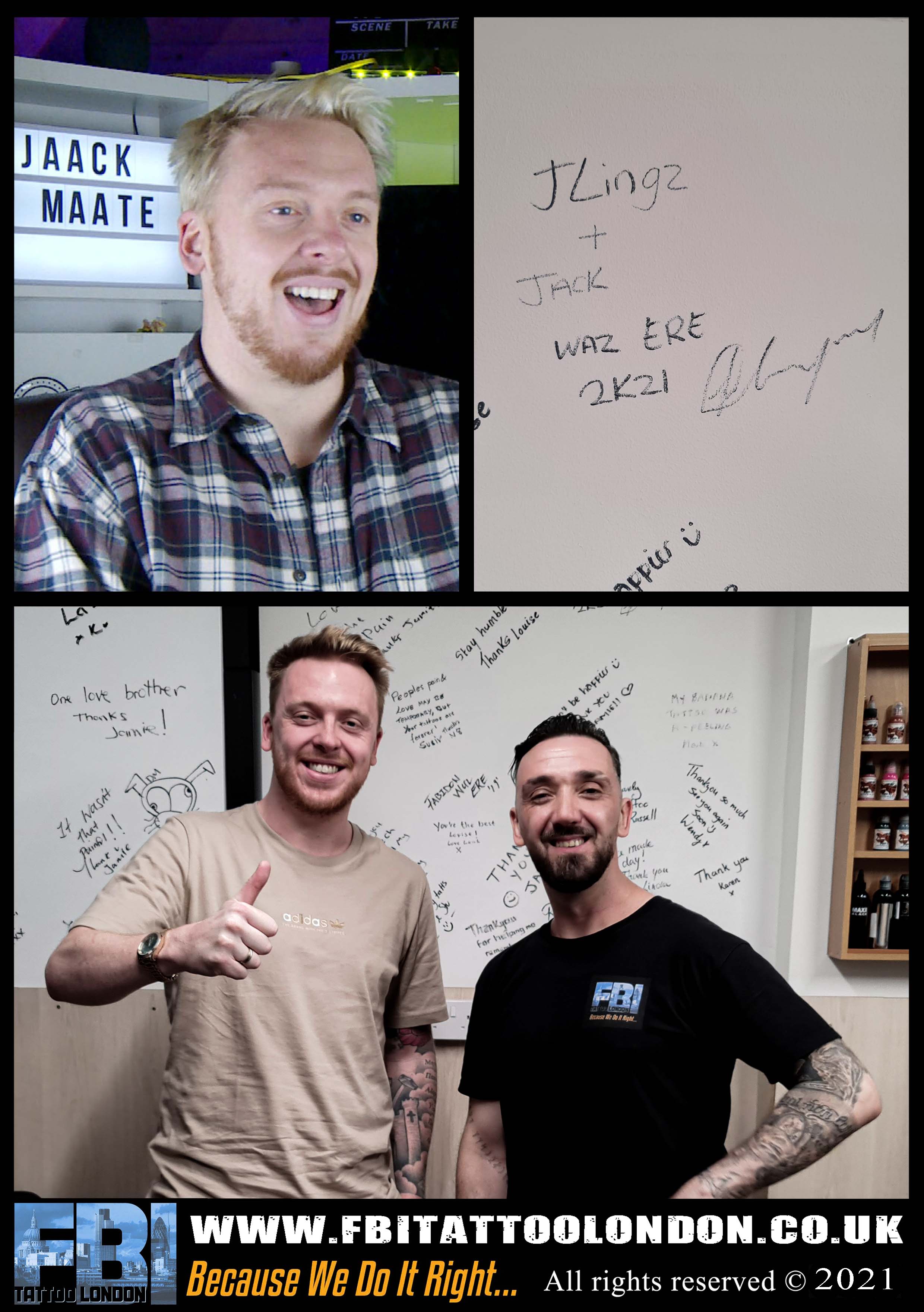 Lotan Carter is a cheeky and charming lad from Essex. He is also one of the leading stars of the male stripper group Dreamboys, however Lotan originally trained as a ballet dancer which explains the rock solid abs and legs. His uncle is Louise Spence (also famous dancer, chorographer and TV personality) and at the age of 20, they appeared alongside each other on Pineapple Dance Studios - a documentary on the London dance school. He has "never not had attention from women”, and he also tries to “challenge the stereotype of strippers” with participating in several charity events. He was one of the main organizers of the London Bush Aid where several celebrities showed up and helped the cause. FBI Tattoo London is proud to have been one of the sponsors of the event. Thank you Lotan! 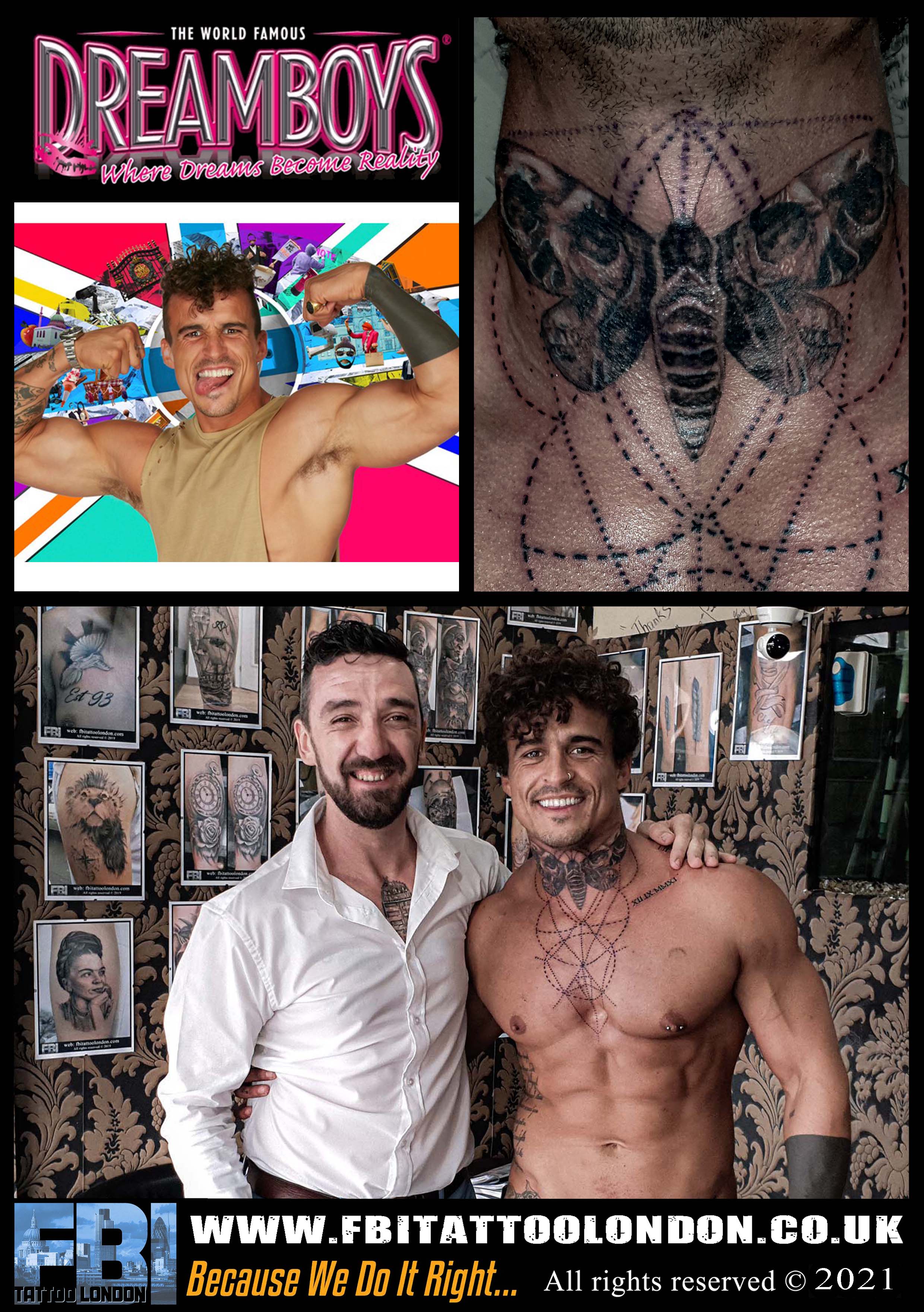 Jack Wish is a singer, busker, songwriter mostly known for his solo album called "Extasy" which was produced by Andrea Consoli.
His amazing and kind personality is very well paired up with some magnificent vocal cords.
Jack visited our Walthamstow branch for a music related tattoo which we were happy to provide him.
Thank you Jack! 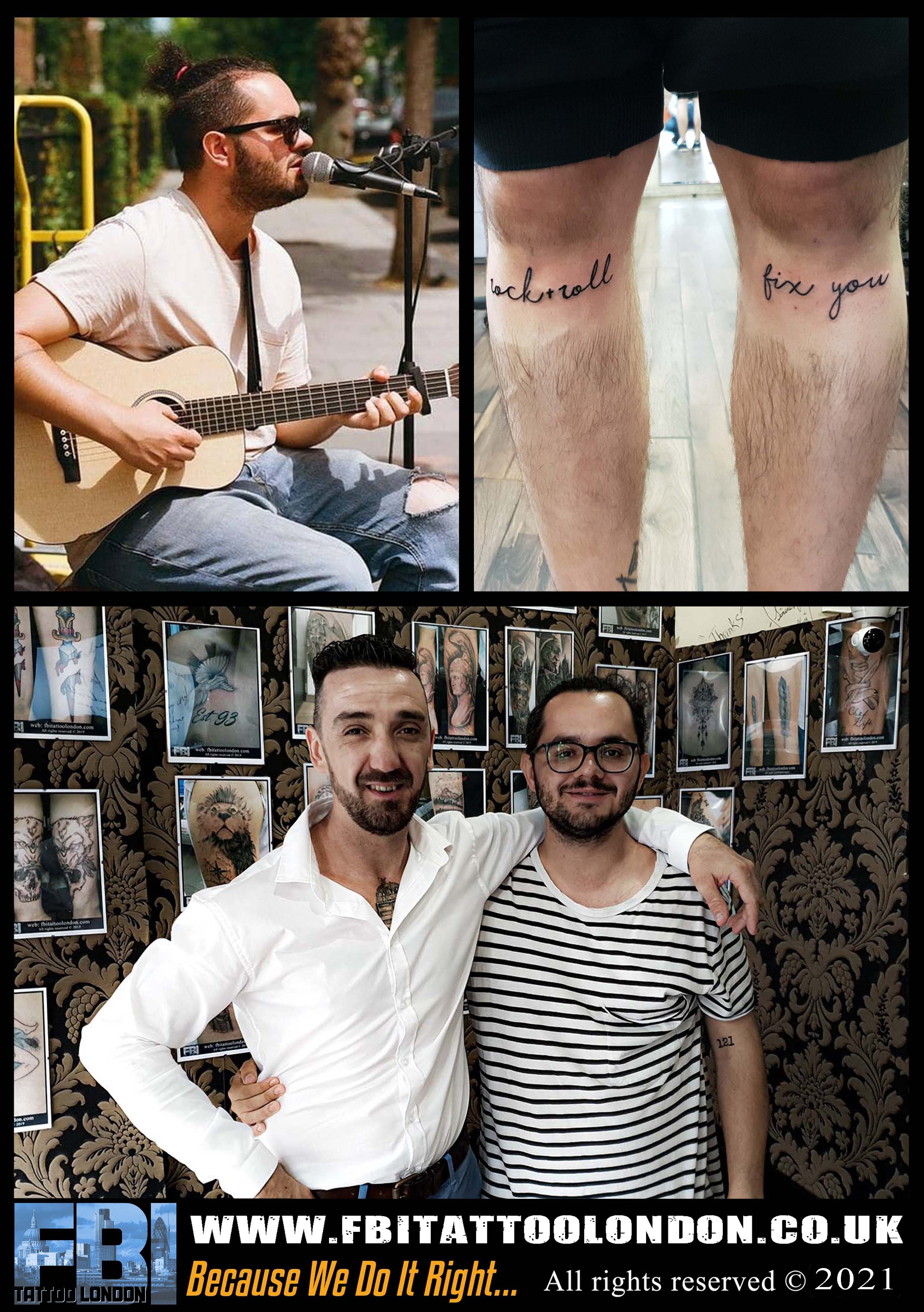